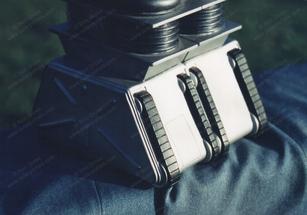 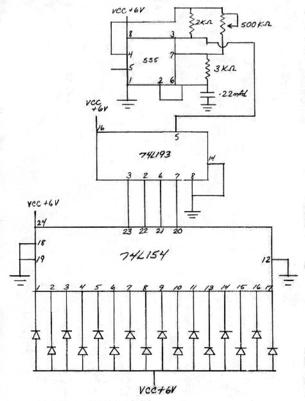 With the required structural modifications out of the way, I decided to defer primary painting and detailing until I had installed all necessary components of an elaborate lighting circuit, which was intended to reproduce the original as faithfully as possible. As a first step, it was necessary to purge the voice box to make room for the new circuit assembly. In addition to the aforementioned dialog, the box also displays a hideous laugh, obnoxiously supplied at no extra charge. Upon extraction, my first inclination was to test its durability against my concrete basement wall. After accidentally playing it with a weak battery, which allowed for pitch correction, however, I realized for the first time that the supplied American voice was actually that of Dick Tufeld. As a result, I decided to retain and reposition the voice box down inside the leg assembly. It would later be necessary to provide a new outlet for the start button, as well as a displaced battery holder for ease of replacement.

The lighting circuit itself is actually a modified version of my original design for David Merriman's ten inch Jupiter 2 model (SCALE MODELER, MAY 1990). The circuit allows for sequential lighting of up to 16 discreet LEDs with a variable timer controlled by a trim pot. With the exception of two IC's which required special ordering, all component parts and necessary hardware were available from Radio Shack. Instead of etching all components into a neat, circular module as before, the primary circuit was hand wired on a small breadboard, with output terminals added for the now displaced LEDs. The LEDs could be wired irregularly either singly or in parallel, in such a way as to create the illusion of a random pattern. As such, the schematic that I have provided does not dictate LED wiring at the output terminals for any specific locations; there is room for flexibility based on personal preference. The number and placement of the LEDs throughout the robot itself, however, was critical to achieve the proper effect. A total of forty two were used in all, which included seventeen for the head, one for the chest piece, and twenty four, collectively, for the three distinctive areas which occupy the vertical strip along the mid section.

The process of properly lighting the head first involved preparing the various parts for mounting the required LEDs. A series of tiny holes were drilled in all three faces of the triangular section, often referred to as the robot's "electronic brain," after which it was split apart at the seam to allow for LED installation. A total of seven clear lens/ yellow light subminiature LEDs were properly positioned and super glued in place, two of which defined the robot's "eyes," located on opposite sides of the front surface. Three more red submini LEDs were mounted facing upward on the top half, and the common leads for all were joined together. Sections of insulated 30 gauge wire wrap wire were soldered to each of the other leads, then twisted together to form a bundle which could be fed through the drilled-out neck and into the main body, soon to house the circuit board. As a final step, the halves were realigned and joined with super glue. In lighting the spoked-shaped section directly below, it was necessary to remove the seven existing plastic tips to allow for subminiature orange LED replacements. Black heat shrinkable tubing was used to conceal the leads, which were run along the remaining length of each spoke, then wired and bundled as before. A small hole was drilled into the side of the inner support shaft (part of the neck assembly) to provide the necessary feed-through for the wiring array.

LIGHTING THE CHEST AND MIDSECTION

Lighting for the main chest piece was accomplished with a single ultra-bright "jumbo" red LED, supported with a plastic strip inside the body. In order to fully illuminate this area, it was necessary to trim away excess plastic that formed an unneeded support ledge for the removable clear part. To avoid producing a point source effect, I decided to "frost" the underside of this part with fine grade sandpaper, which resulted in a diffused, uniform light throughout. Finally, the open slots originally intended for the voice box were closed using a section of high grade transparent vinyl tape.

The lighting requirements for the midsection necessitated cutting away the entire supplied rectangular area and beginning from scratch. This was done somewhat reluctantly, as the original detailing in this area was impressively accurate. A refitting plastic strip was prepared to support the various types of lighting with appropriate drilling and cutting, then painted black. The twin large, round "indicator" lights located just below the main chest piece were redefined with 5/16 inch diameter translucent lenses, taken from submini incandescent lamp assemblies. The lenses were encircled with 24 gauge tinned copper wire to create a framed appearance, and back-lit with appropriate red and green LEDs. The square framework of lighted "program switches" was reconfigured with double layers of 3/16 inch square panels, cut from sheets of 0.25mm red and green acetate. A backing support was prepared by masking a properly sized piece of clear acetate, spray painting silver, then applying the new panels to the remaining clear squares with double stick tape. A support frame for the necessary two rows of back lighting LEDs was then constructed and fitted directly behind the new assembly. The smaller "indicator" lights comprising the two bottom rows of the midsection were close enough in size and shape to allow for direct substitution of standard submini LEDs in various colors.

After physical installation of the full complement of LEDs, it was time to determine the order of wiring at the output terminals of the circuit board. Since the square framework of lights needed to be in a constantly "on" state, it was necessary to wire them in parallel directly with the power source, with a series 1KOHM dropping resistor. Upon completion of the required soldering, the board was secured to the inner wall of the upper body with double stick foam tape. The 6VDC power requirement was facilitated by the installation of a submini phone jack near the robot's "power pack" (it seemed like a suitable location), which was then wired to the board in parallel with an internally mounted rechargeable battery pack (4 "AA" nicads). With this arrangement, a compatible AC adapter can serve as both a direct power source and a battery charger for wireless operation. My experience with this circuit indicates that up to four hours of continuous use can be realized on a single, full charge. As a final consideration, I installed a tiny toggle switch in the hole vacated by the voice box button to serve as a master power control, by wiring it in series with the positive lead that feeds the circuit board. The new lighting system is by far the most important enhancement to this model, giving it a unique and dynamic character. As such, I was concerned that no manner of still photography could really do it justice. Thanks to my photographer's knowledge of lighting, filtering, and time exposure, however, I am quite impressed with the results.

Despite its humorous shortcomings, the supplied instruction manual does offer an excellent photographic color guide for painting. The only significant error I could detect involved the fact that concave side of each of the "radar" antennae should be silver in contrast to their respective red and yellow opposite facings. A departure from the guide of a somewhat more subjective nature involved my decision to carry over the dark metallic gray color used for the legs (Plasticote no. 7179) to also include the four textured surfaces on the lower curved section of the upper body, the arm end caps, and the new inner disc-shaped supports for the claws. After proper masking, the newly fashioned claws themselves were spray-painted bright red.

The basic silver color of the robot was finished in two stages, which involved a primer application of Testors' standard silver, followed by a coat of their new "super silver metallic" (no. 1807). The latter seems to possess not only a superior metallic luster, but also better adhesion properties for longevity. Since the details of the tread assembly were molded directly into the foundation, I found it beneficial to utilize a liquid masking film before applying the necessary flat black paint. Upon application and curing of the rubbery compound, x-acto knife cuts were made to define specific areas of masking, and the excess material was peeled away. After applying the paint and allowing it to dry thoroughly, the remainder of the film was removed, revealing clean, crisp edges of a sort which would otherwise be nearly impossible. One last consideration before finalizing the relocation of the voice box, and being able to call this model complete, was to pour a 1/2 inch depth of liquid plastic inside the hollow tread section. Upon settling and curing, the overall structural stability of the model was significantly improved.

The bottom of the tread section contains one more detail which has a personal significance to me: at a recent science fiction convention, I was fortunate enough to obtain the autograph and endorsement of Bill Mumy, Will Robinson himself. The completed model has been very well received wherever it has been shown, but not always without further suggestion. One person wanted me to blow a new glass bubble for the head in an effort to eliminate the seam. Another wanted me to engineer continuous automated rotation for the antennae. Still another wanted to see new motorized treads and arms that waved automatically. While all ideas are appreciated, I find that some are beyond the range of my current technology, and as such, quite frankly, they just do not compute. 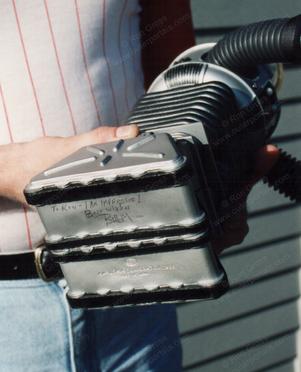