Taking the model world's best representation of the Robot to the theoretical limit, with minor structural modifications, electronic lighting, and accurate detailing. . .

Regular readers of SCALE MODELER may wonder why the sudden interest in the '60s TV series LOST IN SPACE, with a myriad of recent articles. The fact is that unlike STAR TREK (both old and new) which offers comparatively few opportunities for modeling beyond the various starships themselves, LOST IN SPACE offers a wealth of material based on a diversity of interesting futuristic hardware. Even after the show began to fade into a campy parody of its former self, that profusion of sophisticated hardware was still there in the background, as an ever-present reminder of those more dramatic earlier times. Today, LOST IN SPACE, despite it deficiencies, seems to be more popular than ever: as of this writing, it is scheduled to air seven days a week on cable's new SCI-FI Channel.

CAPSULE HISTORY OF THE ROBOT

Ironically, the show's most popular hardware element, the Robot, was not originally intended to be LOST IN SPACE at all, as it was no where to be found in the original pilot film. The pilot footage was eventually edited into several early episodes, with cleverly interwoven subplots to include the new characters of the adversarial Dr. Smith, and what was initially described as the "Environmental Control Robot," later dubbed model B-9. The robot became an instant hit, and the phrases "Warning! Warning!, and "that does not compute" could be heard around schoolyards across the country. Its popularity continued to grow due to interaction with the Dr. Smith character, as conceived and perpetuated by Jonathan Harris himself.

The robot was brought to life by Bob May, who occupied the primary prop (actually an elaborate costume) for the show's entire three year run, and series narrator Dick Tufeld, who masterfully supplied the voice. The physical design was the brainchild of art director Robert Kinoshita, also the creator of Robby the Robot from the classic film FORBIDDEN PLANET, with which the LIS robot bears a certain resemblance. Kinoshita's engineering background was invaluable to the Fox prop department in working out the details of construction, which included a blown plastic bubble, a fiberglass main body, and rubberized arms and legs. Eventually a secondary robot prop was built for long shots, which contained less detail and fewer flexible parts. It didn't take long for the world of merchandising to capitalize on the popularity of the robot. The first available product was a motorized toy offered by Remco in the fall of 1966. Although terribly inaccurate, it did find its way into a couple of episodes of the series which required the use of miniature extras. A much more credible representation was the smaller plastic model kit issued by Aurora Plastics in 1968. Today, a mint version of this kit, which originally sold for $.98, can command a price tag of up to $800. Then, suddenly in 1986, long after the marketing for LOST IN SPACE products by American companies had ceased, the Japanese Masudaya Corporation released two more robot figures with the highest degree of accuracy yet achieved: a four inch wind-up toy, and a 16 inch, 1/5th scale near masterpiece. Although I recognized that the latter was not perfect, I immediately envisioned its transformation into something truly unique and remarkable.

The Masudaya robot, mysteriously labeled "YM-3" with no reference to LOST IN SPACE, comes equipped with a single flashing light, supported by a voice box which contains popular robot phrases in both Japanese and English. Since little assembly is required, some may argue that this product actually qualifies more as a sophisticated toy rather than a model. If left in "raw" form, in which case it is somewhat reminiscent of the colorless robot seen in the first season, I would have to agree. The absence of detailing plus the fact that certain inaccurate physical characteristics invite modification, however, provide a prime opportunity for modelers. At first I wondered how most of this model could be so impeccably accurate, while certain smaller structural details were not even close. It then occurred to me that the tooling must have been based on the partially restored secondary robot prop, which had been on display in Japan at that time, as the same general flaws are evident on each.

Fortunately, upon receipt of this model, I had already thoroughly researched the correct proportioning and detailing of the robot in order to properly execute a series of blueprints for another publication. Although I eventually decided that it was in my best interest to withdraw that material, I have since enhanced the robot drawings even further for SCALE MODELER, offering them here as what I honestly believe are the best possible references for accuracy. The blueprints are represented in 1/15th scale, which allows for simple whole number proportioning to the 1/5th scale model. The structural problem areas, as indicated by the drawings, involve the twin, elliptical "radar" antennae below the neck area, the shoulder-mounted lift hooks, the overall diameter of the main body, and the claw assemblies.

As supplied, the antennae elements were oversized and lacked proper curvature. I decided that the best manner in which to deal with this problem was to purge everything above the ball joints and begin from scratch. The new elements were cut from plastic sheet to the required oval shape and 1/2 X 5/16 inch size, heat-softened by close contact with a soldering iron, then curved into shape using a 1/4 inch diameter copper tube as a guide. After positioning one element horizontally and the other vertically, tiny notches were defined at each base to facilitate the attachment of short posts, cut from 22 gauge solid wire. Double layers of plastic tubing defining the correct height and tiered effect for the sockets were then super-glued atop each ball joint, with the resulting combination now providing the opportunity for manual rotation. A final requirement was to laterally extend each antenna outward from the disc-shaped support by 1/16 inch, which was achieved by simply adding short segments of plastic tubing.

Modifying the oversized lift hooks proved to be a much simpler operation in that all that was required was to detach each hook section from its base with small wire cutters, trim the parts to achieve an overall height of 3/8 inch, and reassemble with super glue. A minor modification which must be considered optional dealt with lengthening the neck in an effort to create a more "alert" appearance. The procedure involved winding a 3/16th inch width of 22 gauge black insulated wire around the plastic section below the visible part of the neck, which is intended to fit inside the access hole. Tiny holes were drilled to define the proper stop points and to conceal the ends of the wire. Since there would no longer be enough plastic material to form a friction fit as originally designed, it would later be necessary, during final assembly, to affix this part with super glue.

A structural problem which was not possible to attack directly involved the diameter of the main upper body. While the lower curved area of the body located just above the natural waist pivot is correct, the top of this section defines a point of separation permitting internal access to the supplied voice box. An exaggerated "ledge" effect is evident at the seam, as the remainder of the body structure is slightly undersized. I decided that in itself this effect did not create a major problem; it was only when the diameter was considered as a whole, specifically in relation to the tread width, did it become bothersome. My solution was to dissect the lower leg/ tread section and trim a plastic area which defined an unnecessary gap between the two halves. After re-assembly with super glue, the body size/ tread width ratio was improved to a satisfactory degree.

REFASHIONING THE CLAWS FROM SCRATCH

Certain sections of the instruction manual supplied with this model suffer from what may be described as a "loose" translation. "How to put parts" refers to basic assembly, and "how to make real claws" describes the option of filling in erroneously tooled grooves with putty. Since the supplied claws are also oversized and lack the proper angled/ tapered effect, I regret to report that the only way to "make real claws" is to "put parts" directly into the garbage can and start over from scratch. On the positive side, this situation offered an opportunity for utilizing the standard pattern/mold/casting process.

The patterns for the new claws were fashioned from balsa wood in two parts to create the necessary angled effect, a detail almost universally overlooked. The semi-circular hook-shaped sections were sculpted from panels intended for model airplane wings, which provided a natural taper. The finished patterns were then secured to the base of a small containment box, over which a liquid RTV rubber/catalyst mixture was poured and allowed to cure. Finally, the assembly was removed from the box, and the patterns were extracted to reveal the completed mold. As a casting material, I prefer Alumilite Liquid Plastic in a 1:1 ratio because of its fast cure properties and essentially odorless nature. A solid part is ready for trimming and fine sanding only a few minutes after pouring the mixture into the mold. Two sets of claws were cast and surface-prepared (four pieces in all), then secured to circular backings which had been cut from plastic sheet to fit the openings at the end of each arm. The backings were constructed with a double layer arrangement, which allowed the definition of recessed wells into which the claws were mounted. 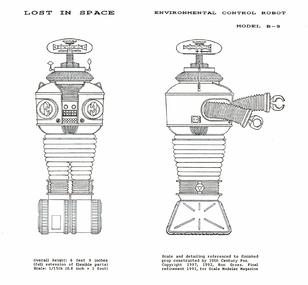 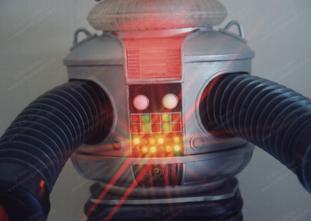 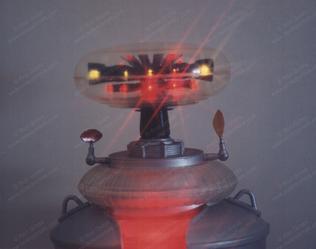 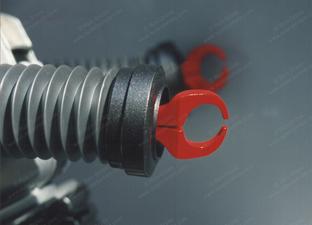