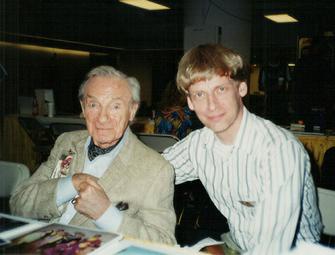 "Outer Portals" is Ron's first effort to showcase his own work after many years of being featured on other sites. He is now officially licensed by Synthesis Entertainment to create and market poster art based on the Irwin Allen television properties. All "Portal" support graphics on this site were created by Ron Gross, and are copyrighted by him. All other artistic images and model photography are also copyrighted, and may not be used for any other purpose without written permission.

Ron Gross is a graphic artist who is skilled in both traditional and digital rendering techniques. Selected works actually employ a distinctive hybrid methodology of his own personal development. Ron's accomplishments include assorted box art illustrations for both Polar Lights and Moebius Models dating back to 1998. As a model prototyping artisan, Ron scratch built the Jupiter 2 model that eventually became the design basis for the classic kit marketed by Polar Lights in 1998, thus filling the void for this decades-long awaited product.

Ron has contributed multiple articles to publications such as "Scale Modeler," "Fine Scale Modeler," and "Sci-Fi and Fantasy Modeller" to share his novel scratch building techniques. In 2010 and 2015, Ron also designed the official 45th and 50th anniversary logos for "Lost in Space" in association with Kevin Burns of Synthesis Entertainment. In another area, Ron has lent his rendering skills to renowned science educator and McArthur Fellowship recipient Dr. Shawn Carlson for his "LabRats" project, involving science education for kids.