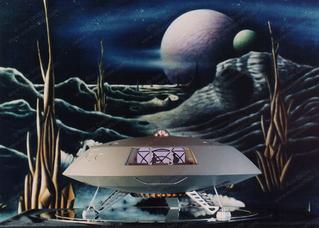 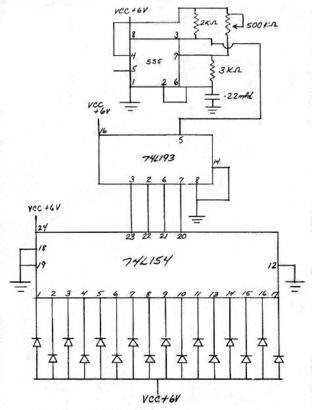 Tooling the lighting ring, or "reactor core" proved to be the challenge of my scratch-building career. Without access to a lathe, I was forced to improvise an alternate method of generating the necessary tapered shape to serve as the basis for the pattern. The solution was to secure a round plastic "stop" inside a properly angled funnel with rope caulk, then pour in a suitable quantity of fast-curing two-part resin. Integrated into the plastic disc was a centrally mounted section of a pump-spray cap, which would later produce the slightly tapered circular wall of a required central depression. Three sections were cast, carefully sanded, and layered together to create an angled lateral recess which would allow future definition of the specified 32 individual panels. Since the bottom of the "reactor core" displays another set of 32 window-like panels in a circular array, a similar planar recess was created by properly spacing sized plastic rings cut from plastic sheet. The bottom spoke-like features were represented with individual pieces of strip plastic stock, as were the panel dividers within each of the established recessed areas.

Since the final detailing of the finished "reactor core" would involve the attachment of protruding "fins" on each of the angled panel dividers, it would be necessary to scribe in corresponding grooves to aid adhesion. I found that the softer strip plastic stock was not adequately conducive to this treatment, so it became necessary to create an intermediate RTV rubber mold of the pattern as it then existed, and cast a new master pattern out of resin for final detailing. The problem with this process is that with each generation of molding/casting, an additional shrinkage factor of at least one percent is introduced. Fortunately, I discovered that it is possible to temporarily and uniformly swell an RTV rubber mold by briefly immersing it in a small container of gasoline, then thoroughly rinsing it with water. While I am not advocating liberal use of this technique because of the obvious hazard involved, it does seem to serve a purpose for error correction when such an unexpected emergency situation arises.

With the pattern now complete, a final RTV rubber mold was prepared along with a suitable rubber core, which was cast from the original funnel. A surface-covering layer of two-part clear epoxy resin was then poured and allowed to cure, which served as a support base for the male counterpart. The remainder of the open mold was then filled with the same material, which yielded a translucent hollow casting that could be surface sanded, enhanced with the addition of lateral "fins" cut from thin plastic sheet, and eventually painted with the aid of a liquid masking compound. A center countersunk screw hole was drilled for principal mounting and lighting circuit attachment, which could be later concealed by a painted plastic disc cut to match the diameter of the central depression.

The associated lighting circuit is a hand-crafted variation of the one that I discussed in my January, 1993 article for SCALE MODELER entitled "The Robot from Lost in Space." This adaptation utilizes 32 specialized LED's mounted in a circular configuration on an extension printed circuit module, up to eight of which light simultaneously in a clockwise rotating pattern driven by a variable speed timer. An opportunity quickly became apparent to also illuminate the top dome with a simple expansion of the circuit. The beacon-like "percolating" 3-D effect was recreated with an auxiliary reverse-motion bank of eight micro white light bulbs supported by a transparent lucite rod, two of which continuously light in tandem aided by a centrally mounted clear refracting bead.

The fashioning of the three landing leg assemblies involved the use of more traditional, but no less ambitious construction techniques. The master footpad pattern was initiated by laminating together carefully sanded pieces of cured resin to reproduce the required tapered/ layered effect. Tiny slits were then made at all locations where protruding "veins" should be evident, and trimmed sections of plastic sheet were vertically inserted to complete the appearance. The footpad center core was represented with a short section of aluminum tubing inserted into a properly drilled hole. An RTV rubber mold was then prepared of the master, and three resin pieces were eventually cast with perfect detail preservation after employing the technique of dusting the cured mold with talcum powder to reduce surface friction. The "hydraulic" tubing sections were reproduced from aluminum stock, with the flexible joints represented by hand-wound 24-gauge wire.

A master pattern of the landing gear side wall was carefully cut from plastic sheet and mounted inside a small box to enable the pouring of an RTV rubber mold. Six castings were then made and surface-sanded with the aid of an attached wooden block. All subsequent support construction involved the use of carefully prepared individual pieces cut from plastic sheet, assembly with cyanoacrylate adhesive, and surface smoothing with acetone and extra fine grit sandpaper. The clevis pin assemblies,, which join the two essential sections of each landing leg, were also fashioned from plastic sheet with no other consideration than cosmetic appearance. The true points of support in the finished model are located on the inner walls of the leg well assemblies, and on the underside of an internally fitted phenolic platform which also provides a foundation for the upper deck.

The flight deck assembly located directly behind the main view port was built up from plastic sheet and mated with photo-reduced illustrations to represent the control panels. Color printing on clear acetate created an additional opportunity to implement a dramatic back-lighting effect. Beyond this integral enhancement, plus the inclusion of two figures from the old Aurora "Invaders" kit (now altered to resemble Jupiter 2 personnel), I decided to temporarily fit my new creation with a simple but familiar mock interior. The open, crossed-hatched geometric arrangement suggesting general internal activity was carefully constructed from plastic stripping to duplicate the corresponding display that was evident within the original four-foot articulated miniature. Basic internal lighting was accomplished with the use of a single curved LightSheet strip, along with an associated drive module, variable resistor, and power supply. All support circuitry was carefully organized to be completely hidden from view with the removable and visually restricting upper hull section in place.

Although it appeared as if the primary series miniature had been painted a flat, uniform gray color, I decided to deviate somewhat from that bland scheme and add a little luster to the extent that it did not seriously violate the model's authenticity. I found that Testor's Super Silver Metallic (no. 1807) was the perfect choice for the primary hulls, as it presented an agreeable, slightly ochre tint and a more durable finish than the company's standard Silver color (no. 1246), which I utilized as a basecoat/ primer. Fine detailing of intricate areas included the use of Testor's Chrome (no. 1290) for the "hydraulic" landing gear tubing, and, for mild contrast, Testor's basic Silver for the lighting ring fins.

The overall look of the ship as seen in the series' classic stock footage landing shot has now been exactly replicated, allowing for a necessarily enhanced level of outer-hull detailing. Although reference has been made in this article to a future complete upper deck interior for my new creation, it is still under construction as of this writing. Suffice to say at this point that all internal appointments as defined by the original full-sized studio set have been reconciled to the revised scale and hull contour with a complete set of blueprint plans (which was no easy task), and will likely be the subject of a future Scale Modeler installment. For the present, however, I have satisfaction in the fact that I now possess a basic model very much like the one that a company such as Aurora Plastics was expected to have produced some 30 years ago.

Upon completion of this primary phase of the project, I came to realize that I had attained a level of accuracy and a sense of personal achievement that no established kit nor outside build-up service could have provided. Despite this long-awaited victory, however, I find that there are still occasions when my attention seems mysteriously drawn to miscellaneous items which might be adapted for parts, such as those same domed plastic containers inside today's store front coin-operated trinket dispensers. That, I suspect, will never change. 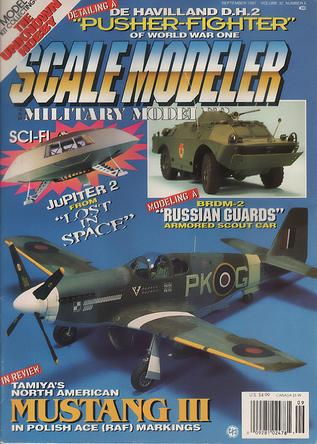 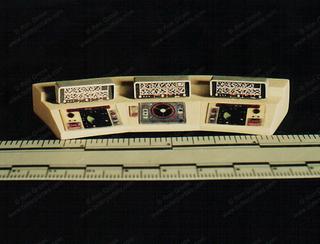 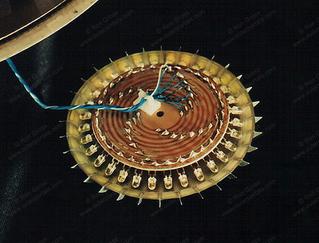 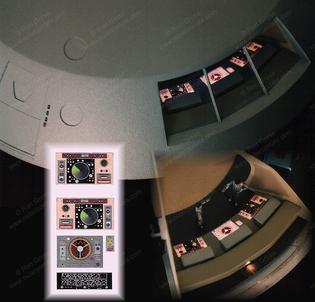 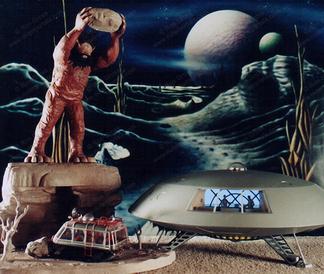