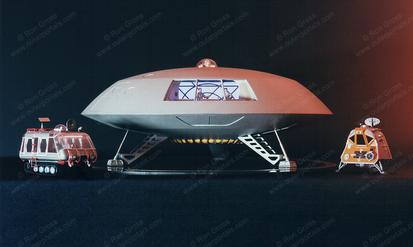 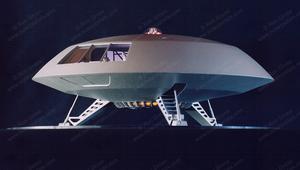 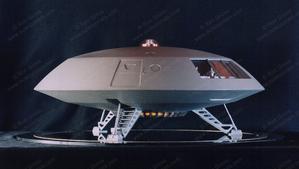 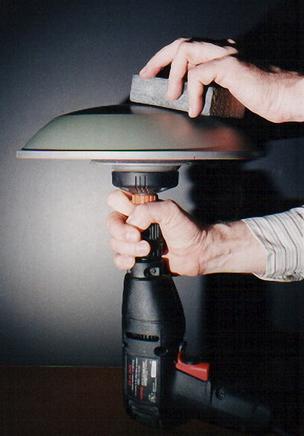 ​​​​THE DEFINITIVE JUPITER 2: NO LONGER "LOST IN SPACE"

Unlocking the secret and scratch-building the first genuinely accurate scale model of the famous spacecraft from the '60s TV series on the eve of its fictional launch date.

It has been over four years since my last installment appeared in this publication, but much of that time has been put to good use in transforming a life-long vision into reality. My first two articles, which dealt with subjects from the 1960's TV classic "LOST IN SPACE," may now be considered preliminary projects culminating in this proud event: the creation of the first truly accurate replica of the series' intriguing Jupiter 2 spaceship. Over the years the fulfillment of this childhood dream has proven to be an exercise in frustration. As a young man I waited in vain for Aurora Plastics to release the model kit of my yearning, as what would have been a logical companion to several existing LOST IN SPACE-related issues. Their failure to do so is now considered by many to be one of the most misguided decisions which that ill-fated but fondly remembered company ever made. Ensuing years found me in an endless search for parts and potential patterns, which might somehow contribute to my own individual effort. Clear plastic containers inside common trinket dispensers found near store entrances, for example, always caught my eye with the top dome of the Jupiter 2 in mind. Although several "garage" kits from a number of smaller companies did eventually surface, all fell short of expectations in various key areas. My quest was therefore momentarily led down a different path: I agreed to contract with a custom build-up service, which also proved to be non-productive. I realized at that point that it was time to return to basics, and that the old adage "if you want it done right, do it yourself" was still applicable in full measure.

HISTORY OF THE JUPITER 2, AND THE ELUSIVE HULL CONTOUR

Part of the explanation as to why no American company produced a model kit of the Jupiter 2 during the initial series run may have involved confusion over the craft's basic structure. While both the original full scale studio mock-up and the exterior set used for principal filming were constructed with composite conic sections yielding straight-line profiles, all miniatures were crafted with graceful, compound curves to define the upper hull area. To add to the paradox, later variations also displayed a revised lower hull section when the decision was made by series executives to portray the vehicle as a two-level design, despite the fact that any attempt to reconcile the existence of a genuine lower deck would still end in futility. The dilemma of any company considering the development of a Jupiter 2 model would then naturally involve the decision of which of the several available versions to represent. In the minds of most fans the issue should have been elementary, as the four-foot articulated studio miniature with extended landing gear would have been the obvious choice.

As I began my project, however, I realized that recreating the elegant design defined by the series' primary miniature would involve more than simply translating the surviving Fox blueprints into individual patterns and molds. While it has long been known that the original plans did not match the miniature's actual physical construction, I knew of no definitive documentation of this anomaly, despite several notable attempts. I finally joined forces with well known media science fiction archivist Mike Sussek, who supplied valuable photographic resource material generated by his own unique method of capturing still images directly from film. After carefully tracing the contour from an authentic edge-on print and comparing it to the Fox profile, we found that the lower hull section and the vertical placement of the top dome matched exactly, but that the upper hull outline was distinctly different. The actual four-foot primary miniature always exhibited a subtle, elusive quality of appearing simultaneously massive and streamlined, and our analysis indeed revealed additional upper hull stock which effectively elevated the roof line, while engulfing 15% of the dome at its base. Mike and I speculated that perhaps Fox technicians cast a second fiberglass hull from the original mold and affixed it atop the original, as a convenient means of resizing the main viewport area to better reconcile with the modified post-pilot studio set. Resurfacing to a smooth finish would then account for the two degree difference in the lateral contour angle revealed by our comparison, as well as the slightly accentuated rooftop curvature. We also entertained the possibility that the addition of a reinforcing surface-mounted platform between the two primary hulls may have necessitated a similar overall re-proportioning. Setting all theories aside, I finally deemed it necessary to prepare my own finished drawing based solely on the tangible and objective evidence at hand. After countless attempts from myself and others spanning many years, I knew that this profile revealed the truth at last, and it promptly became the master blueprint plan for the project.

A diameter of 10 3/8 inches for the two basic hull patterns was selected to ultimately result in a 1/70th SCALE, which was primarily intended to match that of the modified Aurora diorama on which I reported in my first article for SCALE MODELER (September, 1992). Knowledgeable observers will note that this scale is not predicated on the full-scale studio mock-up diameter of 48 feet, with which the articulated miniature actually had very little in common. It is instead based on the size of a projected seven-foot hatchway as it would fit inside the duplicated contour with a plausible hull thickness, and with the floor located directly on the seam line between the two primary hulls. Using this rationale, the diameter becomes 60 scale feet, and all calculations are now independently and logically referenced to the size of a human figure.

Past experience has consistently indicated that even a small deviation in the upper hull profile could drastically alter the character of the finished product. Because of the critical nature of this element that we so painstakingly recreated for the first time, I decided to contract out for primary pattern construction. Model Pattern Company of Maple Heights, Ohio produced two master hull patterns by utilizing a CAD-assisted process with excellent results, requiring only a minor adjustment in the degree of upper-hull rooftop curvature. I was especially gratified that the roof line edge was sharply defined despite the fact that it is created by the oblique intersection of two convex curves; a characteristic which has repeatedly proven difficult to reproduce.

Once I was confident that the combined master patterns represented a perfect three-dimensional translation of my new blueprint profile, the next step was to create individual molds using trimmed "cake keepers" as containment dams. My decision to avoid a compromising vacuum forming procedure permitted me to employ the use of RTV silicone rubber for the molding compound, which is inherently superior to a more cost-effective plaster option. Upon discovering that my traditional Alumilite resin product was not easily conformable to a hollow casting process, I chose fiberglass, akin to the original craftsmen, as the medium for rendering the hulls. The professionals at Kindt-Collins of Cleveland, Ohio supplied me with quality materials as well as expert advice. After applying initial impression coatings of thixotropic resin, fiberglass cloth saturated with laminating resin was tightly worked into each cavity and allowed to cure. Edge finishing of the extracted castings included the use of a small hobby saw, and multiple sandpaper sheets attached to a flat platform. Controlled definition of recessed surface detail was accomplished by friction-fitting individual pieces cut from plastic sheet to corresponding cut-out areas, then securing them from the inner walls with instant-bonding adhesive.

I had previously determined that the future reconciliation of planned interior detail would require subtle revision of selected corresponding exterior features. The frame for the slightly expanded view port section was fashioned from plastic sheet, anchored to a matching cut-out area with a suitable cyanoacrylate adhesive, puttied, and sanded smooth. Fitted sections of 1/16th-inch "T-beam" plastic stock completed the basic support structure for the three transparent panels, which were represented with trimmed pieces of rigid, clear styrene. Additional framing for a finished, customized look was accomplished with the careful application of thin plastic strips. The tether hooks and the pushbutton assembly located beside the primary hatch were detailed with a small hand drill, and sections of formed copper wire of suitably light gauge.

A pattern for the top dome was fashioned by fine-shaping a resin casting made from a rubber mold of a one-inch diameter light bulb. A piece of clear acetate was then secured to a cardboard frame, heated in an oven, and ultimately positioned between a circle gauge and an open cup. The process of driving the supported pattern through the circular guide forced the softened plastic underneath to conform to its shape. The trimmed dome was finally secured to the top of the upper hull section from within through a 15/16 in. diameter hole, which afforded the required 85% external hemispherical exposure indicated by the original miniature.

Final lower hull detailing employed the use of cut-out sections for the three landing gear leg wells, which were promptly mated with surrounding side-wall structures fabricated from individual sections of plastic sheet. A large circular hole was also cut into the bottom-most area to accommodate an internal lighting circuit for the intricate, suspended ring-like component, which I have relevantly dubbed the "reactor core." 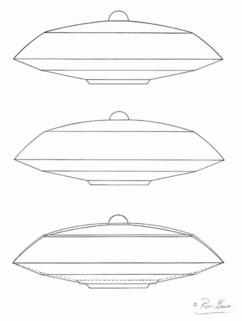 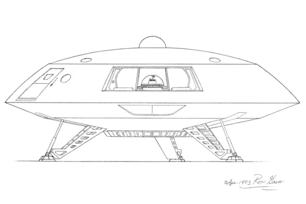 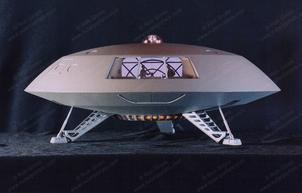 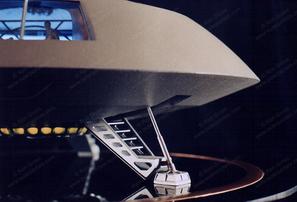