​​​​​​For the drapes, two sided decals were constructed and applied to the now defined window edges from inside with double-stick tape. It was then necessary to drill tiny holes to accommodate installation of the ladder steps, spotlights, and luggage rack, which had to be secured from within using super glue. The spotlights were constructed with a combination of head pins and tiny beads purchased at a craft store, while the ladder steps and rack were fashioned from 22 gauge solid wire using a small pair of needle nose pliers.

Constructing the other roof top appointments provided more opportunity for fun and experimentation. The flexible necks for both the dish antenna and the solar battery panel were formed by spiraling thin 24 gauge wire around a heavier wire core, then curving them into shape. As with most of the interior detail, the base for these components as well are the dish itself were fashioned from scrap resin. The solar panel was formed by joining together three layers consisting of clear acetate, aluminum repair tape, and a black vinyl backing which produced a convincing mirrored effect. All necessary parts were then joined with super glue, properly painted (chrome for the bases flat black for the necks, and mist gray for the dish), and attached to the top In correct positions.

The dome, which serves as the "gun hatch" cover could have been vacuum formed by conventional means, but I discovered an effective shortcut. I began by attaching a small square piece of acetate to a cardboard frame, and heated It In an oven at about 300 degrees for few minutes. Then after placing the heated plastic sheet on top of a circle gauge that had been positioned over a cup, I simply pressed a miniature light bulb of proper diameter through a hole to form the hemisphere. Selecting the right sized hole in the circle gauge was necessary in this procedure to avoid producing a draping effect, which would have distorted the shape of the dome. A support base was the constructed from thin gauge plastic, and the flat ring at the base was defined by applying a thin piece of white vinyl tape which had been painted chrome.

The tread section presented a unique challenge in that I could find nothing to utilize directly from an existing small toy, which was my original plan. I finally cannibalized the wheels from small matchbox cars, and mounted them in properly spaced rows on balsa wood backings cut to the size and shape Indicated by the plan. Short sections of copper tubing defining the rear drive mechanism completed each row, and were painted flat black along with the backings. The treads themselves were constructed from electrician's heat shrinkable tape, which I found to best provide the necessary thickness and durability.

After trimming two pieces of the tape to the proper width, x-act knife cuts were made at 0.05 inch intervals across each width, and every other section was removed. Lengthwise support strips were then added, and center raised sections suggesting a traction ridge were defined with additional short segments of tape. After Some necessary reinforcement with super glue, the entire tape assemblies were painted flat black not only to create a realistic rubbery look, but also to enhance structural cohesion. The completed treads were then secured around the edges of the wheel assembly again using super glue. The two sections were finally combined into a single unit with a small piece of balsa wood which provided proper spacing, and a rear drive axle was Installed using a fitted section of 20 gauge solid wire.

The final assembly first involved joining the two primary sections of the upper body, filling in the seams with green contour putty, and fine-sanding. Some delicate masking was then required to facilitate spray painting appropriate sections of the body mist gray metallic, before the final framing sections could be added. The fore and aft bumpers, fashioned from 22 gauge wire, were then carefully applied to the framing support strips with a slower setting super glue, which enabled critical positioning for proper symmetry. Finally, all secured exterior fire parts were painted bright red with a small brush.

The front headlights were defined by simply encircling the cut-off tips of translucent LED's with 24 gauge tinned wire. Four additional spotlights of the type described earlier were positioned into pre-drilled holes below the main body, and all six were painted chrome. Decals defining the front vent grille and engine cover were then applied with double stick tape, and all remaining main sections were joined together. To insure a highly refined, finished look, post detail and cleanup operations were then performed, and the Chariot model was finally complete.

THE DIORAMA AND BASE

The assembly and painting of the giant and base were fairly straightforward, but still deserve some comment. The brownish color of the giant, verified by rare color photos, can best be described as close to "raw umber," but I could find no suitable spray enamel. My solution was to use delicate overlays of brown, copper, and clear matte finish sprays to produce the desired effect. For the hair, I used a flat dark brown enamel labeled "rubber," and applied it with a small brush.

The base and cliff assembly were painted with a combination of natural wood and dark tan spray enamels to produce a convincing sandstone look, with flat white highlighting some of the edges for effect. The original LOST IN SPACE lettering near the top of the cliff was carefully removed with a sandpaper file, as the style and positioning seemed incompatible with this new overall level of detail and refinement. Without the original figures, I also decided that the model needed a little more activity. "Dead trees," again sold for model railroad displays, but here painted to match the base, added a nice touch and are, in fact, consistent with one of the set designs involving the giant in the original TV episode. Finally, a selected small rock from my backyard, painted in matching earth tones, found its way onto the base beside the Chariot, suggesting a failed first attempt by the giant.

The finished work, I believe, produces a realistic representation of a classic event from LOST IN SPACE that has often been used as a symbol for the series. It is important to note that this result has been achieved using mostly vision and imagination, combined with novel but relatively simple techniques which are available to everyone. After more than twenty five years, I finally have the model of my childhood dreams In my collection, but In an enhanced and accurized version I would have never thought possible at that time. Perhaps it was worth the wait, after all. 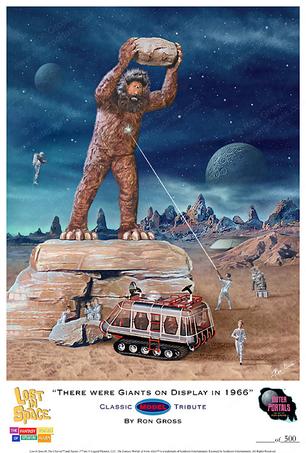