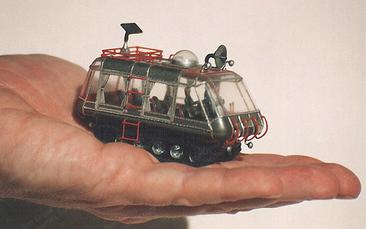 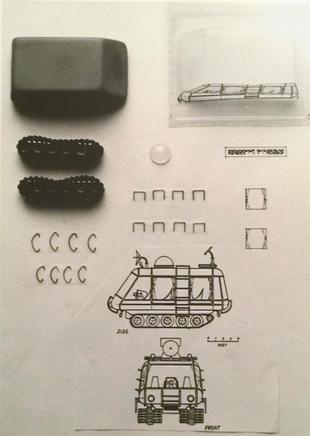 In the Fall of 1966, as I vividly recall, one of my favorite pastimes involved browsing through the hobby section of the local dime store to see what new plastic model kits might be available. Until then, my passion had been to collect and assemble the Aurora Universal monster models, with as much technical competence as one could expect from a typical twelve year old. I can't describe the exuberance I felt when I first laid eyes upon a new kit based on my favorite TV show, LOST IN SPACE. That kit, Aurora model no. 420, featured a beautiful cover painting which revealed a diorama of the Cyclops, from an early black-and-white episode, menacing the Robinson Family and their all-terrain exploratory vehicle, the "Chariot." Perhaps my excitement was due in part to the fact that this model offered a representation of the original, more dramatic LOST IN SPACE, rather than the lighthearted fantasy into which the show had already evolved. In any event, I surrendered my hard earned $l.49 plus tax without hesitation, and proceeded to assemble the model with loving care. Unlike many of my prized possessions from that period, however, it unfortunately did not survive the passage of time.

Today, this kit is an elite collector's Item commanding exorbitant price tags of up to $2000 for mint, unassembled samples. Recently, a small company advertised a resin recast version of kit no. 420, and I realized that I had a chance to recapture a part of my youth by obtaining something which had been lost so many years before. Upon receipt of this kit, however, I recalled what I did not like about the original as a kid: simply that the Chariot was inaccurate, out of scale, and offered no clear parts in favor of unconvincing complete window decals. Since there was no other Chariot model in proper scale available to use as a substitute, my choice seemed clear: If I were really going to mate this effort worthwhile, I would simply have to rebuild the Chariot from scratch.

In selecting the size of the Chariot, I used the forty-foot height of the giant as stated in the original LOST IN SPACE pilot script (from which the aired episode as eventually derived) as a reference point. A simple mathematical calculation soon revealed that a three-inch length would be necessary for this newly established 1/70 scale, a size considerably smaller than the one supplied. An early impression that the new Chariot size seemed a bit too small was quickly alleviated when I considered the fact that this diorama dynamically represents the giant atop the cliff, rather than on ground level, as depicted on film.

Since every scratch-building project must begin with a good blueprint plan, I simply referred to my own unpublished LOST IN SPACE TECHNICAL MANUAL: VOLUME TWO (originally prepared upon request for a publisher a few years ago, but withdrawn due to legal concerns). I then committed not only to accuracy but also to including more detail compared with the fine Lunar Models offering of the Chariot which is over twice this size.

The main body of the Chariot, I determined, would require a male pattern, or "plug" over which to thermoform a clear plastic part. I actually formed the plug from the solid resin Chariot supplied with the kit by cutting it down to size with a small saw, then fine-sanding it to shape and scale. All usable scrap resin pieces were retained for future formation of detail parts. As this was my fast completely scratch built project, it was necessary to construct a simple vacuum box apparatus to facilitate the thermoforming process. The finished box consists of two wooden compartments separated by a platform to support the pattern, which contains a variety of small manually drilled holes. The bottom compartment contains a single side hole with a rubber gasket big enough to accommodate a vacuum cleaner hose. Edge sealing was accomplished with simple duct tape. A tightly fitting cover made of simple corrugated cardboard, with an open top window for the clear plastic sheet, completed the basic construction.

After firmly securing the plastic sheet with a staple gun, the entire top assembly was heated in the oven, then fitted onto the box. The air was then evacuated by the vacuum cleaner, and presto! the softened plastic was forced to conform to the shape of the pattern which had been secured onto the platform. Please note that this is simplified apparatus which will not meet all vacuum forming needs, but which was more than adequate for this purpose. The final step in the process was simply to remove the excess plastic and fine sand the edges of the remaining part to match the corresponding section of the blueprint.

The base of the Chariot was formed from a small piece of balsa wood, carefully sanded to the properly rounded contour required by the plan. Since I was not interested in producing a fleet of Chariots, I decided to utilize this part directly rather than treat it as a pattern from which to make an RTV rubber mold for future multiple castings. The tread support sections located just below the base of the main body was also formed from balsa wood and treated in like manner. In this case however, a little more elaborate sculpting was necessary to properly define the rounded engine cover located between the two tread sections. The finished parts were painted mist gray metallic, with the engine cover assembly and the opposite rear facing highlighted in bright red.

I made a decision that the interior detail of this model should be as complete as possible despite its small size. The necessary appointments included the front computer console, a small floor-mounted instrument panel, the shifting sticks, the navigation unit console assembly, and six bucket seats. The shifting sticks were made from simple 22 gauge solid wire and painted red, with the natural insulation defining the bare sections. The extreme tips were coated with super glue and painted flat black to provide the suggestion of handle grips.

The construction of most other interior parts involved formation from scrap resin pieces before final detailing. The faces of the master computer console and instrument panel were drawn in a larger size to insure a neat and crisp look, then reduced to proper scale with a copying machine. The essentially flat nature of these and selected other surfaces made it possible to convincingly render them as intricate decals using 3M archival double stick tape. The various knobs and lights on the face of the navigation unit and the rear control panel were defined by drilling tiny holes, then inserting short pieces of solid 22 gauge wire, the trimmed tips of which could be appropriately painted. The small handles on the navigation unit were formed from the same wire and also inserted into pre-drilled holes, while the pivoting support for the unit was constructed from plastic sheet. The main bodies of all Interior parts were painted mist gray metallic except the seats, which were finished with a darker fern gray, and backed with red vinyl tape.

My research disclosed that the two front seats on each side of the navigation console should be slightly recessed in relation to their two pairs of more tightly spaced rear counterparts. A recessed area was defined in the base section with fine sculpting and sanding, an two full lengthwise side ledges cut from plastic sheet were also added. The floor area was painted fern gray with the exception of the front face of each side ledge and the recessed area, which research disclosed should be bright red. The seats were supported from the floor with short sections of 29 gauge tinned copper wire.

The final consideration for the interior involved the inclusion of figures, since the size of the kit's original exterior figures made them unusable in this new scale. I was fortunate enough to find two seated figures in a set sold for model railroad displays (Atlas no. 793) which were close enough in scale to be convincing, and which could be painted to remarkably resemble the two elder Robinsons in their first season casual wear. The costume colors as revealed by rare publicity stills involved blue with red trim, and olive green, for the male and female figures, respectively.

The exterior frame of the main body was defined by applying thinly cut strips of of composite tape prepared by placing aluminum repair tape over red vinyl. Since the proper color scheme Included red for the interior framing, this method proved to be the quickest end most convincing manner in which to create the necessary illusion, considering the transparent nature of the upper body. The doors and rear hatch were defined with a double layer of framing, which is a detail I have not noticed on any other model of the Chariot to date. The tiny rivets in the framework were simply defined with tiny, finely spaced indentations made by the tip of a dart. The necessary red color of the top framed section, which would eventually contain the dish assembly and spotlights, was achieved by applying a properly sized independent section of red vinyl tape. 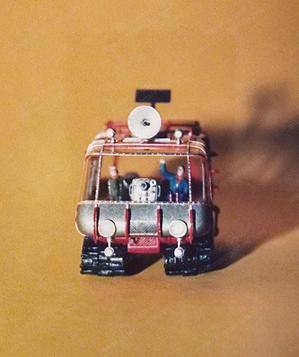 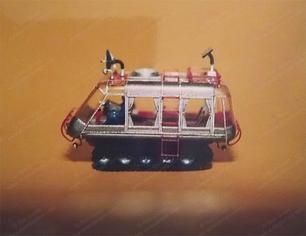 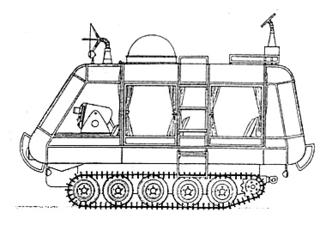